Any problems or questions please contact any of the Battlefield-X Staff.
Who is online?
In total there are 3 users online :: 0 Registered, 0 Hidden and 3 Guests

Well guys, I know that it has only been out for a few days, but I have already put a dozen hours into the Single Player, about four into the Multiplayer and about two in the Co-op so I figured that I would start up a review for the Website.

I shall try to write this without putting any spoilers into it. You play a character called Jason Brody. Known as a bit of a daredevil, he is on a trip with his two brothers, his girlfriend and some others.
Whilst on the trip, they get kidnapped by a nutter called Vaas. They learn that they are to be ransomed. Jason manages to escape but is hurt doing it. When you come around you are in a village on the island and you begin your adventure to free your family and friends.

This is a long process. And there is loads to do. You will start with just a pistol and a few magazines. You need to hunt animals in order to use the skins to upgrade your equipment. Holsters, Ammo belts, explosive pouches…hell you even need to upgrade your wallet in order to hold more money.

There are loads to do in the game. Story missions, Hunting, Enemy strongholds, Radio towers, Mini games, Bounties, Races, Crafting items. It is a HUGE game.

Graphically, the game does struggle with frame rates at times, but this is only a minor niggle for me and it has not detracted from the emersion in the game at all.

The weapons all feel good and have great sound effects.

You can also be stealthy and try to pick off your opponents quietly, or go in like Rambo. I strongly suggest being quiet though as, otherwise; you will get killed a lot,

The game has a separate Co-op story. It takes place 6 months prior to the main game and has four new characters. It is also set over six missions and can be played either via XBL or split screen.

All XP earned during the co-op is carried over to your Multiplayer profile so it is worth doing.

As I have only done the first one of the missions so far, I shall keep this very brief. It is more stripped down than the main game. Gone are the hunting and exploration of the main game. Instead you are purely going from A to B, killing enemies and trying to survive.
But that is not to say that it is boring. Far from it actually. There is still a good variety of enemies, some puzzles to do and teamwork to required.
Would it be good enough if the main game was like this? No. But thinking of it as a nice addition to the game, and a fun little adventure and you shall really enjoy it.

Right, this is normally the important part of a game on this generation of consoles. Strangely enough, it is the part that I had least interest in.

Well, I couldn’t have been more wrong. It is Brilliant!!!

There are 5 or 6 different game types including the usual TDM and Domination. Custom Loadouts, Perks, and loads of maps. So far, so Call of Duty right?
Well, I cannot place my finger on it, but it really works, and works well. Solid controls, great weapons (the bow and arrow is SO much fun), zip wires, hit detection, weapon feedback….. It all works so well.

The brilliant Map Editor is back again. And it is also a vast improvement over the one in FC2. I have only had a little look at it, but it is the type of thing that I could easily spend hours in, making a map and giving it a blast.

Could well be my GOTY. It has it all. Great SP, very good Co-op and a brilliant MP 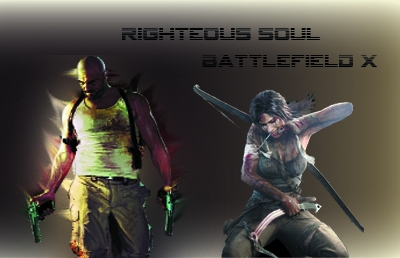 Ubisoft took everyone’s thoughts on Far Cry 2 and then took the good parts from Far Cry 1 and 2 and then blended them with even more goodness to create this…. Far Cry 3!

You wake to find yourself and your older brother tied up in a cage with Vaas (the pirate boss) talking to your brother. Once he walks away you have to escape with your brother…. There is a big stealth part and then lots of running away where you get knocked out. You awake to find yourself in Amanaki Town and have a weird tattoo on your arm. This is where the game opens up for you, you do the very few things that the main person at the beginning you are then allowed to go and do as you wish for as long as you want. You start off with nothing but a pistol as Righteous said and you then have to go round killing animals and skinning them to upgrade what you can hold. You have to upgrade your weapon holster, wallet, loot rucksack, syringe kit, quiver for bow and arrow, throwables pouch, everything. This adds a couple of hours to the game time at least, yes you could ignore it all but then you could only carry 1 gun, no bow, £2000 at a time, 24 items in your loot rucksack and 4 syringes which is nowhere near enough when it comes to near the end of the game. The tattoo which I mentioned is the skill point system where you get XP for killing people, animals and doing missions. You upgrade your health, takedown abilities and damage resistance.

Graphically, it does quite well, looks stunning but I do recommend as if you don’t you get long freezes whilst it loads a new part of the map and then sometimes it loads untextured which is quite strange. A big thing that has returned from Far Cry 2 is the fire. How I loved the fire but also hated it. If your carrying around a flame thrower or molotovs and you decided to burn someone or something make sure you have an escape route as the first will spread to whatever it can and standing in the middle of it all is not the best of ideas! As well as the fire, the healing mechanic has also returned from Far Cry 2. The ability to heal yourself even if you don’t have a healing syringe is awesome. Some of the animations are you bandaging up your arm, twisting your arm back round into place, twisting half of your thumb back into place and pulling a shark tooth our of your arm and then bandaging it up! The healing part is where some of the bets but most cringeworthy sounds come in. The sound of you twisting your arm back into place is quite possibly the most disgusting but awesome sounds you will hear. Whilst hunting you will hear the sound of an animal behind you and by the time you turn around it is on top of you and trying to kill you.

In terms of gameplay, the guns feel meaty, sound great but the best weapon to use is the bow and arrow, there is nothing more rewarding than getting someone in the head with the bow! You have 38 main missions to play through, 50-60 side missions, 150+ collectibles, 34 outposts to liberate which act as fast travel destinations, 18 radio towers which let you view part of the map and certain guns free to buy at the store. Coming onto that, it is the only thing that I feel is bad about it. All of the money you collect from doing the missions and side missions is rendered useless after you have all of the radio towers as all of the guns are free. All you can do with the money is stock up on ammo and buy the collectibles maps. Other than that though, I can safely say that Far Cry 3 just single player alone is one of the best games I have played this year, if not ever!

The co-op mode is the mode I have done the least on (just 1 mission) and it seems that Ubisoft have taken a different path with this from the campaign. You simply have to go from point to point killing people, you can’ try and be silent or stealth round them, you have to kill them to move on. This isn’t bad as it actually good fun and also with the mission I have done so far there was a mini-game on quadbikes where you each have to race against each other to get as many bombs as possible to the location and the person who got the most won. It was kind of pointless but was fun nonetheless.

The multiplayer is the bit that most surprised me. I thought it would be a bit ‘meh’ but in fact it is very good! The maps are incredibly good, the hit detection is pretty much perfect and some of the guns are fun to use (bow especially). With the inclusion of the map editor and the playlist that includes the maps created by the users you could find a lot of interesting maps and a lot of replay ability in it as well. That’s not to say it’s perfect, its not. It has done what any other shooter has done nowadays with the MP but it has done it well with the twist of it heavily relying on teamwork.

Overall, the game is brilliant. The single player almost faultless, the co-op seems good fun and a welcome edition to the game and the multiplayer is nothing new but something new to the formula in terms of working together which make it very good.

Multiplayer: 8.5 - Good again, done something new with the already recognisable formula without it being completely different or completely the same.

Co-op: 8 – Good from what I can tell but it has removed some of the main parts of the single player which made it SO good, still fun to play though.

Sounds: 9 – The guns and vehicles sound great and the sound of snapping bones back is gruesome but very rewarding at the same time.

Graphics: 9 – The frame rate sometimes drops when there is a lot going on but other than that it looks absolutely stunning.

Gameplay: 9.7 – It plays brilliantly, smoothly and with all of the mechanics that have been implemented into the single player such as the hunting and crafting make it one of the best games to play this year.